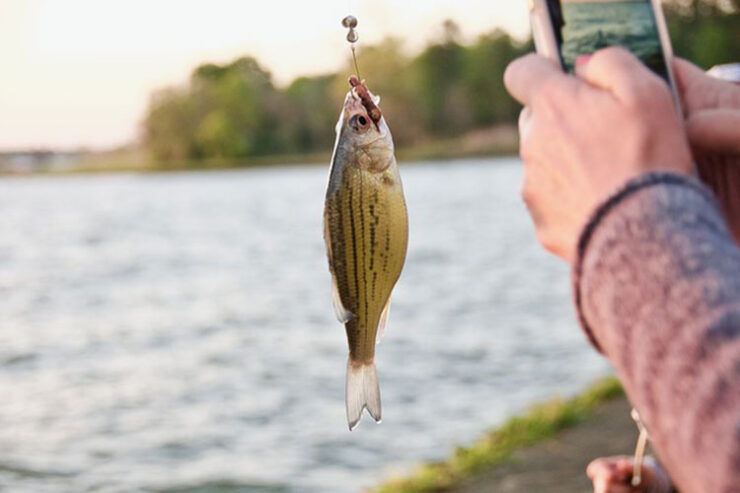 Luring a fish or animal with bait, often a food product, has been an age-old practice for hunting animals. Fishes love to eat bugs, and live bugs have been used for a long time to lure fish to the fisherman’s hook.

However, live bait is increasingly being replaced by artificial ones. So if you have a fishing trip on your agenda, you need to get the most lucrative fishing worms to get a good catch.

Why Using Live Baits For Fishing Is Still A Good Option

The Smell Associated With The Live Bugs Attracts The Fish

When you attach a bait on a hook and immerse it into the water, you hope the fish will be attracted to the bait and, in turn, be caught. However, it is not easy to lure fish, and in a large body of water, many factors can distract a fish away from the bait. So it is always better to make the bait as lucrative as possible.

Usually, in a large water body, a visual cue can be missed quite easily because a visual cue requires the bug to be in the line of sight of the fish; however, being directly in the line of sight of an aquatic species is hardly possible, but the chemicals which give the bait its distinct smell can radiate out in all directions. They can quickly diffuse in the water molecules. And hence the target aquatic species can trace the source of the smell (bug) and swim closer to it.

If you are a professional fisherman, the yield that you have per day is vital for your commercial interest. However, if you pursue fishing as a hobby, the yield that you get in a day gives you a sense of joy and satisfaction. In either case, it makes sense to try and maximize the yield and using live bait increases the chances of increasing the yield.

Why Artificial Baits Are Replacing Live Ones

Plastic replicas that have ribbon-like tails almost look real. It is possible to move the ribbon-like tail at quick intervals so that the artificial tail mimics the motion of a natural bug’s tail. This artificial motion can create ripples in the water, and these ripples can be sensed by the target species. However, the person who is fishing will have to put in a lot of effort to constantly move the plastic bug so that ripples are created in the water.

The Same Baits Can Be Used For Multiple Types Of Fishes

Plastic baits do not have a characteristic smell; the same batch can be used for multiple species of fish.

Artificial Bugs Can Be Of A Variety Of Shapes And Colors

A plastic bug can come in any shape and color that you want. So you can get vibrant-colored ones that can easily attract the target species. They are lightweight so that they can be quickly filled inside the water, and thus, they can create ripples while they are underwater.

Artificial Bugs Are Not Messy

Handling live bugs can be messy as they naturally live in dirty or muddy areas. Also, if they are alive and moving, it may be difficult to attach them to the hook, and many of them may slip away, creating a mess. However, such problems will be minimized if a person uses a plastic replica.

Plastic baits can be manufactured in bulk qualities. So essentially, they are infinite in supply, but real bugs are not unlimited. They need to be procured after a lot of hard work. Many fishermen themselves procure the fish that they want to use to lure a fish.

Worms have mechanisms to evade capture, so catching them becomes challenging. Many species of bugs might have slimy bodies, making them easily slip out of their hands. Again, some species might have stings or other defensive mechanisms to attack someone who is trying to capture them.

Artificial Baits Can Be Used In A Variety Of Hooks

Since plastic bugs can be customized to any shape and size, they can easily fit into any type of hook. Natural baits, in contrast, have a definite shape and many species curl up their body when they sense any danger. So attaching an actual insect can be quite a challenge, and unless the fisherman is skilled, he may spend a lot of time attaching a live bait to the hook; however, such problems are negligible with plastic replicas.

Maintaining A Live Bait Alive Is Quite A Challenge

A live insect has to be kept alive for a long time, and this can be quite a challenge. Tiny insects cannot survive for long if they are handled in a rough manner. So they have to be handled quite delicately if they are to remain alive till the time they are immersed in the water.

So if the fishing trip gets delayed, extra expenditure has to be incurred on keeping the bugs alive. The fisherman will have to spend money on worm feed to keep them alive for extended periods of time.

Modern commercial fishing ventures use artificial plastic baits as they can be procured in bulk and mimic a living bug in many ways. They come in vibrant colors and attract the target species quite effectively. However, traditional fishermen still use living bait to lure the target easily. They have a distinctive smell that attracts the targets even when they are a great distance away from the hook or the net.