As we all know that football is a physical and contact sport, having a good height is an added advantage, especially in crucial positions like the center defense, center forward too. In fact, we now have a rich history of the shortest soccer players who have proved their technical abilities in the sport.

Though, we have accepted the fact that height and strong built do not really matter anymore because it is hard to explain how players that are 5.4 cm short with a skinny and light physique are still playing and thriving in the game. All that counts in the game is the technical skills that a soccer player possessed.

So the shortest soccer players we have today have successfully proven that skill and technical abilities are what that matters in competitive soccer matches.

Here are the top 10 shortest soccer players in the world

Talking about the football god, a legend like Messi does not need an introduction. He has successfully proven height does not really matter. It is always strange not seeing him topping any football list, that is the exact point we were are making that size does really matter.

Barcelona’s superstar is 170 cm tall. though there are still other players shorter than him. Another irony about the Argentine international is that his height didn’t stop him from winning 6 ballon d’Or.

The Chilean legend is 169 cm taller, and his highest didn’t stop him playing for the biggest teams in the world like Man United and Fc Barcelona.

He is very amazing on the ball, having fast feet and tremendous speed. He joins Barcelona in 2011 and automatically became the league’s shortest player. How low center gravity enables him to move gracefully and led Chile to two consecutive Copa America titles.

In today’s football, there is no Italian midfielder in this world better than Marco Verratti. He is touted as the Andre Pirlo’s heir in the Italian National team.  He is 165 cm tall and remains one of the best passers of the ball in the sport, technically gifted and also blessed with great vision.  He also has great stamina and strength which even his mentor, Andre Pirlo does not possess.

The Italian forward is with a height of 164 cm, this really earned him the nickname ‘Atomic Ant’, simply because he is like a weapon of mass destruction. When it comes to a dead-ball situation, he is up there with the best, you can call him when you need pace in your team.  Though, he has enjoyed mixed form during his time in Italy. He is a very very proficient confident player.

It is really funny that Italian Serie A is blessed with shorter and technically gifted footballers… Lorenzo Insigne is one of those players that history will remember in Italy as one of those super good footballers. The Italian international is 163 cm taller. He is among the best forwards in the world. There is no way he is not going to be mentioned.

Diego is an outstanding professional footballer with an Argentine passport. A professional footballer 161 cm tall, a player that has played in a very physical league such as Chilean top division really speaks volumes on how really good he is. He has played in Spanish La Liga with Malaga and Granada. He is part of the Universidad Catolica squad that won the Chilean Primera division title in 2019.

Another player who found himself on our great list brilliant shortest soccer players. He was born on July 6, 1992, he started his football career at River Plate back in 2005. He is 159 cm tall. He moved to Mexico with Veracruz in the summer of 2014. where is great scoring ability got him 17 goals in his 120 appearances for the Mexican club?

One thing that is most synonymous with most Argentine footballers is the little height.  Maxi is another Argentine player on our list of short players, who plays for MLS side, Ney York City FC, with 158 cm tall.  He also shares the same short stature as Daniel Keko his teammate. Both players are 158 cm tall. 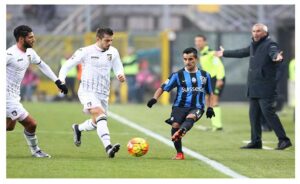 Jafal takes the second spot on our list of short soccer players. Rashed has really done well for himself, also with an illustrious career. His height doesn’t stop him from having such a great career.

The first on our list of shortest players is no other than the Brazilian midfielder Elton Jose who is 154 cm tall and currently plays for Saudi Arabia outfit Al- Qadsiah. Elton made his name has one of the silkiest soccer players with the Romanian side, Steaua Bucarest despite his height.