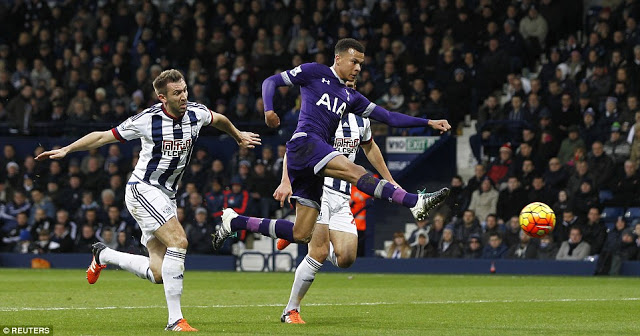 Tottenham had to come from a goal down to rescue a point against a spirited West Bromwich Albion side. The Baggies had stunned the Wembley home crowd after taking the lead after just 4 minutes.

Jake Livermore shrugged off Dele Alli in the midfield before the ball found its way to Venezuelan forward, Salomon Rondon who scored only what was his second goal of the campaign.

Pochettino would he be furious with the manner in which Rondon shrugged off the attentions of centre back, Davinson Sanchez to stroke the ball into the bottom left corner.

Forever the savior, 24-year-old striker scored his 9th league goal of the season on the 74th minute to rescue a point for the Lilywhites. He arrived at the near post to tap the ball past Foster, the West Brom shotstopper.

West Brom had recently parted ways with Tony Pulis, with Gary Megson acting in a caretaker role until a permanent appointment is made. This was Tottenham’s third draw in four games, as they are struggling to break down their opponents in recent games.

As the game neared its end, Spurs couldn’t find a winner, as Albion were solid at the back and Gabe nothing away.

Speaking after the game, Tottenham boss, Mauricio Pochettino was unhappy with the result saying, “Of course we are disappointed. In the way, we concede the first goal, and then they had the belief.”

“For us it was difficult, it was a massive impact for us, and difficult to come back to the game. In the second half, I think we created enough chances to score and win the game but were unlucky because we didn’t have enough time to score the second goal.” He added.