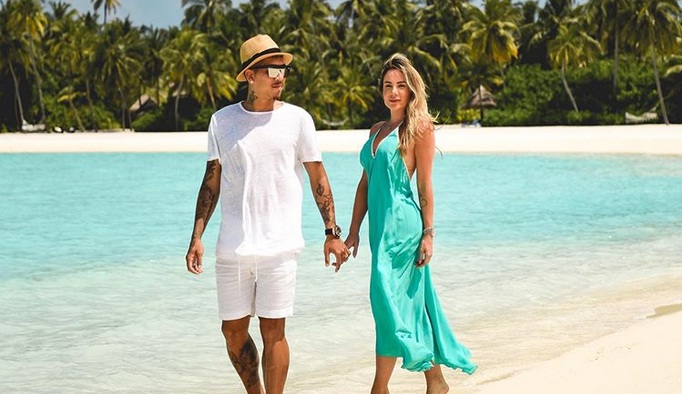 Footballers are known to attract beautiful ladies as their profession makes them meet these superstars at gala night and award events organized by their clubs or football governing bodies like FIFA and UEFA. That is why when many discovered that Liverpool forward, Robert Firmino was going out with a model, it didn’t come as a surprise to them.

Roberto Firmino is one of the best strikers in the Premier League, playing alongside Mohammed Salah and Saido Mane. The trio has formed a partnership that has been hugely successful for Liverpool on the field. Firmino on the other hand also has a hugely successful pairing at home with his wife, Larissa Pereira.

A dig into Roberto Firmino’s wife, Larissa Pereira’s life shows why the Brazilian forward is always on a smile while playing. Having such a beautiful model around any player will make him happy for the rest of his life and the forward want to have that smile on his face forever.

They tie the knot in 2017, four years after meeting each other, and three years after the relationship started. The wedding took place at Firmino’s birthplace Maceio, Brazil on June 20, 2017. It was a big ceremony which was well attended by friends and family. The best man for the day was his teammate, Philippe Coutinho. Present at the wedding was his teammate at Liverpool then, Alberto Moreno, Allan Souza, and Lucas Leiva.

The love affair is like those in romantic movies where couples date for a while and eventually get married after facing some challenges together. Knowing who Larissa Firmino was will make the love story even more captivating.

Roberto Firmino’s wife was born on December 12, 1992, in Brazil and started her career as a model in her home country. To make her professional career as a model gets to the needed level, there were unconfirmed rumors that she had nose surgery. The model has had her career on the rise ever since her relationship with Firmino became public knowledge.

If there is a competition for the most beautiful wife or girlfriend of a Premier League player, she will definitely be in contention for the award. Her followership on social media platforms is enormous as she has over 600,000 followers on Instagram alone. She is very successful at what she does as she makes a good income from her business. She has a clothing brand called a BeValen Store.

This is a major source of her personal wealth and she does other things within the fashion showbiz that brings in income for her. This has made her not dependent fully on her husband. She has a thriving business of her own despite having a successful man as her husband. This is a very good thing to be especially when she wants to cater for her own family need without having to demand from the husband.

The couple are successfully blessed with two beautiful girls. They had their first daughter in 2014 and named her Valentina. The second girl came two years later and she was named Bella Firmino. Due to the industry, the couples are, there are so much about their family that is available on social media for public view.

As a model, Larissa Firmino will post pictures of the family together and her own personal pictures when she goes out for shows. The husband also does the same after wins or during relaxation or holidays. The family shows the world how much they are happy during the end of season break when they travel to their chosen destination for holiday. They live a very exotic lifestyle that will be admired by many when they share their pictures.

Roberto Firmino’s wife, Larissa Firmino, has been a source of inspiration to the player all through his time at Liverpool even when things aren’t going well in the early days of the attacker in Liverpool. She has been there for him during the tough times.

Many would have imagined how Firmino has survived to be at Liverpool and score less than the other two attackers every season and still enjoy playing alongside them without showing any sign of relentlessness.

There will be a contribution from the wife about how being selfless will make him an important member of the team rather than chancing personal glory. This season, the striker went the whole season without scoring at Anfield in the league until the last day.

This must have been a very tough one for him to live with but having a supportive partner like his will ease the pressure off him even when the coach kept on starting him.

His contribution to the team is obvious and appreciated by everyone at the club and he also has been able to live with the fact that glory shared is better than no glory. Growing from an attacking midfielder to becoming the center man at Liverpool has been a transformation for Firmino and has improved his all-round game.

With the way Jurgen Klopp set up his team to play now, it will be something very easy for him to always make the team. Klopp wants an all-round team like a well-oiled German engine where everyone works in unison to help the collective, the team. Firmino is already on that level and will be easy for him to be the first to adapt to the system.

All these were possible because he has a partner who has not forced him to seek for a place where he will be the hero but supported him to be at Liverpool and have a team glory.

The couple always takes time to share with their Instagram followers how happy they are as parents of two lovely children, but they also share photos of their vacations to the exotic cities.