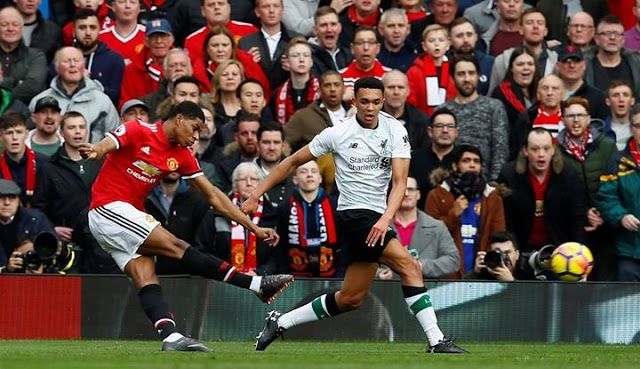 Manchester United will have the opportunity to show everyone why they defended the last time at Anfield when they host Liverpool at Old Trafford this weekend.

Despite Liverpool having their players, especially Mo Salah being in hot form, United head into this home tie with a slight advantage and it’s one every football fan will not want to miss.

The home side has all their first-choice players fit. This means that Jose Mourinho has the luxury of calling from a pool of players to navigate the game. At the back, Eric Bailey is in good form and he seems like the best United defender as he will be partnering most likely Smalling.

Young and Valencia are undisputed first choice at full-back while De Gea is expected to be in goal. Pogba will have another opportunity to prove to doubters that his ability to dictate a match is no fluck and this is the best place to prove it, against rivals.

Alexis Sanchez will be taking part in his first United Liverpool match and he will have a feel of how both clubs don’t see each other. Lukaku’s aim is to improve his record when he faces Liverpool as he has often time been criticized for not scoring against the big boys. He has his opportunity to do so come Saturday.

Jurgen Klopp has made some decisions this season that he will look back and feel those were the things that changed the course of their season. One such is going with Karius as the first choice and making sure the club got Van Dijk regardless of the price.

Those two decisions at the back have been a reason Liverpool are where they are right now. The form of Oxlade-Chamberlain has gotten little or no praise but the former Arsenal man has become a shining star in the middle of the park for Liverpool. He has helped improve the attacking bite in the midfield especially after Coutinho left.

Liverpool’s strongest and best strength is the attack they display. Mane, Firmino and Salah are three deadly players Manchester United defenders will have all day battling.

Overall it’s going to be a good game to watch by the fans and it’s expected to produce a lot of goals. Manchester United currently enjoys a two-point gap over Liverpool and this game might determine who finishes second on the log.